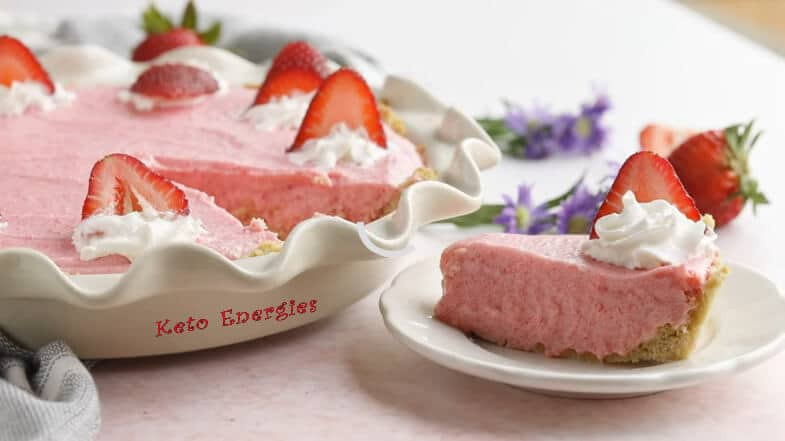 As I mentioned in my Keto Lemon Sour Cream Muffins post earlier this week, strawberries are hard to find here on our island in Belize, and when you do find them they are crazy expensive.

Speaking of expensive produce, I was shopping this morning and saw 1 bunch of asparagus for $24.60 Belize ($12.30 US) – that’s ONE. BUNCH. OF. ASPARAGUS.  Just try to wrap your head around that people.  I’ll give you a minute….

Anyhoo, food costs are through the roof, but I live on a tropical island on the Caribbean so it’s kind of worth it? Maybe?

While I am sometimes deprived of my favorite fruits and veggies from the states, this week was a banner week of lemons, strawberries, and even spaghetti squash – so I’m good with it.

You may have noticed that this keto strawberry icebox pie is not made in a pie plate, but in a springform pan.  That’s because I realized after I had the ingredients and concept in mind for this… that I don’t actually own a pie plate here in Belize. ?

Undaunted, I proceeded making it in the springform pan, and it actually worked out really well. There was none of the breakage you can get with a slanted pie plate, and it sliced and served pretty easily.

Another advantage of the springform pan is that the crust, which can be a little runny until it cools (some people have had issues with this in the Lemon Cloud Pie recipe) stays put without the slanted sides of a traditional pie plate.

I like this style because it hardens into a firm, sweet and crunchy crust that has an almost brittle-like consistency.  It’s useful with this type of pie (cake?) because it doesn’t absorb the moisture from the filling.  So rather than getting soft and mushy like a shortbread crust, it holds up over several days with the same great taste and texture as that first slice.

Like most icebox pies, this keto strawberry icebox pie comes together very easily.  While the crust is baking, you simply puree the filling ingredients in a blender, whip your cream, fold them together, and then after the crust has cooled a little you spoon it in and freeze it.  Then thaw for about 10 minutes before slicing.

Technically you don’t have to freeze the filling.  Problem was, after just chilling it the filling was still soft enough to floof out the sides when I tried this in the mini pie tins.

The weight of the whipped cream topping sank and pushed the slightly soft filling over the edges.  Still so very tasty, and faster than freezing, but it wasn’t as firm or pretty when served.

I guess it depends on who you are making this keto strawberry icebox pie for – if it’s just to eat at home and not for fancy company or to take to a gathering, then chilling it for a bit will work just fine.

Still, if you have a springform pan, I highly recommend using that in lieu of a traditional pie plate – it looks nice, and serves much easier too!

I know that people have their preferences with sweetener, but for this crust recipe I can only recommend erythritol because it crystalizes and hardens like sugar does.  Splenda or stevia won’t give you the same results and your crust may not firm up the same way.  If you want to use an alternative sweetener, I recommend a shortbread or other crust that has proven successful using your sweetener of choice.

Also, I am posting the nutritional info with and without the whipped cream topping for those of you that want to omit it.

Love strawberry desserts?!?  ME TOO.  Try my low carb Strawberry Swirl Cheesecake next!!!

Love strawberry desserts and are also super lazy?  ME TOO.  In that case go for the low carb Strawberry Mug Cake and you can be eating one with only a 5 minute interruption in your Netflix binge watching session!  #lazygirldessertgoals

Had a little too much fun and need to drop some pounds?  Get started today with my free low carb and keto menu plans to kick start your weight loss in 2021!

Wow, your Keto Strawberry Icebox Pie is ready to be enjoyed!